If you’re having problems with not being able to add tables in Visual Studio 2013 through the Server Explorer and you’re only presented with the options ‘Refresh’ and ‘Properties’ then it’s most likely because you haven’t got the SQL Server Data. 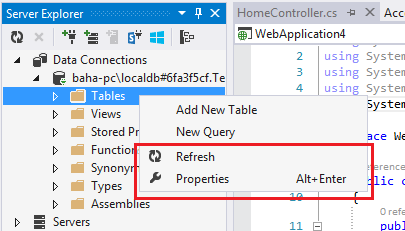 Tools installed. Since late January 2014 SQL Server tooling is built in and shipped as part of the core product. If you had Visual Studio installed already you’re most likely not a fan of re-installing and you don’t have to! Many are however experiencing that the updates are not pushed through via Visual Studio and can’t therefore update.

Solution:
If you haven’t already manually checked for whether you have an update for it  then go to Tools > Extensions and Updates… menu to open the dialog. If you haven’t got an update there regarding the SQL Server Data Tools then you can download the update directly from here (English version). After you have installed the update you can check to make sure it’s all well and done by going to Help > About Microsoft Visual Studio and then scroll down and you should see ‘SQL Server Data Tools 12.0.40403.0’.

I’ve tried to figure out why some people can’t update through Visual Studio itself however it seems none really knows, even on the SQL Server forums.